Why we reason badly about people with DSM diagnoses, but we should use these labels anyway

One extremely powerful aspect of human reasoning is our ability to draw inferences about members of a category. For example, let's say you've just learned that there is such a thing as an okapi, and it's a mammal. You will conclude that the okapi probably has fur or hair, has a heart, a brain, and a spinal cord, gives birth to live young, and feeds its babies with milk.With even greater biological knowledge, you can make inferences about the size and structure of its brain. Both kids and adults do this, and it's an incredibly powerful way of gaining at least tentative knowledge about something without ever having to see it.

Like most human abilities, though, it leads us astray in certain situations we create, just as most people's understanding of perspective, relative size, and color constancy leaves them prey to illusions, and neurotypicals' normally helpful tendency to perceive certain movements as intentional leads them to incorrectly ascribe intentional acts like "chasing" to animated shapes [link goes to a free full text paper, Castelli et al. 2002]. Here, the problem is a little more complicated, and it happens when we attempt to make inferences about people based on their diagnostic categories.

Let's say, for example, that a teacher is told a new student, Alex, has ADHD. The teacher may assume that Alex is male, hyperactive, will disrupt the class, will have difficulty with reading or math, will have a short attention span whether interested or not, will excel at multitasking but not focusing on a single thing, will think and talk too fast, and will benefit from stimulant medication. All these characteristics are true of some people with ADHD. However, Alex might turn out to be a girl with inattentive type ADHD who zones out instead of disrupting the class, excels academically (when interested), can focus for hours when interested, can focus on a single thing but not multitask, thinks, moves and talks slowly, and can't use stimulant medication because it gives her migraines and lessens her appetite to an unhealthy degree.

Now, one might object that some of these incorrect inferences come from the teacher only knowing public stereotypes of ADHD, not the actual DSM definition. The equivalent in autism might be someone whose mental image of autism is a mix of Rain Man, Temple Grandin, and an Autism Speaks ad.

But the problem persists even among people who focus strictly on DSM categories. For example, if a few years ago a clinician was told that a child has "autistic disorder" or "classic autism" rather than "PDD-NOS" or "Aspergers," they might assume the child lacked spoken language and communicative gestures, did not attempt to interact with others, did not engage in pretend play, walked on their toes and flapped their hands, made poor eye contact, had below average IQ, melted down frequently, and so on. But as there are 2361 combinations of characteristics that could lead to this diagnosis in DSM-IV, the child could just as easily speak fluently but reverse pronouns and have difficulty making requests, attempt to interact with others but be ignored, act out elaborate superhero stories on their own, make frequent eye contact, have average IQ but poor self-care skills, shut down rather than melt down, or spin in circles and twist their hair rather than toe walk and flap their hands. Similarly, a person with "high functioning autism" or "Aspergers" might not be a male "little professor" with better verbal than spatial skills, a love of facts over stories, good academic skills, and a muted affect. They could be a female, have better spatial than verbal skills, love creating imaginary worlds and telling stories, perform poorly in school, or appear overly emotional rather than unemotional. Even if the traits being assumed really are diagnostic traits and true of many people in the category, we will often be wrong if we assume them of any individual.

Below: From Jon Brock's blog, an example of 2 children with a DSM-IV autism diagnosis despite having no diagnostic characteristics in common. 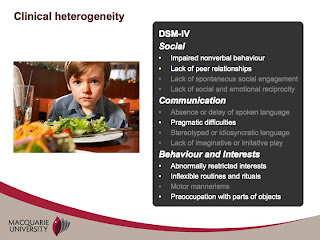 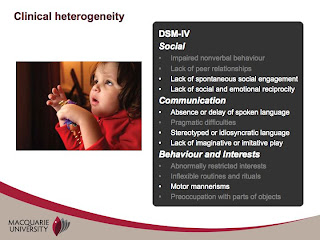 This is one reason why we insidiously assume the same behavior must have different motivations in people with different diagnostic labels. For example, we assume inattention stems from boredom in a child labeled "gifted" and poor executive function in a child labeled "ADHD" when the former could also have poor executive function, and the latter could also be bored, or both could be inattentive for another, less stereotypical reason (e.g., the class is boring). We ascribe specific sorts of motivations to each diagnostic category and so when we see a behavior, like inattention, we reason from the category and forget to consider other possibilities.

Why are we led astray when we make assumptions about people based on diagnostic category, but not when we reason about the biological features of an unfamiliar animal? One reason might be that biological categories, like "mammals," are "natural kinds" where certain characteristics consistently cluster together for real reasons, whereas diagnostic categories are human-created, and the co-occurring characteristics selected developed historically from clinical observation of a set of people who happened to have those characteristics in common (e.g., Leo Kanner's and Hans Aspergers' cases for autism). However, we do not know why these people have these characteristics in common--are there common causes, as with mammals, is it pure coincidence, or are there cultural and historical reasons? As a result, human diagnostic categories are what I call "cluster concepts," while biological categories probably aren't, or are less so.

So what does all this imply for the debate over whether diagnosis is a good thing?

First, the obvious. Both ignorant and more knowledgeable people will make inaccurate inferences about someone with a diagnosis, and diagnosed people and their parents will continually have to combat these assumptions.

So, does that mean it's better not to diagnose someone at all? I still think not, because whether a person is diagnosed or not, they are behaving in the same way, and looking just as different from the norm. Their differences will not be read as "normal," they will simply be assigned to a different set of "diagnostic" categories. Instead of a disability category, they might be assigned to categories like "lazy," "spoiled and badly parented," "doesn't care about other people," "stupid," "on drugs," and so on. I have yet to meet someone who would rather have their difficulties explained this way. To be honest, I think it's more psychologically damaging to view one's character as fundamentally flawed for things one can't help doing, despite one's best efforts, than it is to view oneself as having to cope with having difficulty doing things other people don't, or being naturally inclined to behave in ways most people don't like. Surprisingly, there's actually more room for agency with a disability label, because instead of being an irredeemably lousy human being, you have some weaknesses other people don't have that you can choose how to manage.

Rather than avoid diagnostic labels entirely, we should use them while understanding their limits and taking care to avoid making the same inferences from them that we would with biological categories.
Posted by E.M. at 11:11 AM